Louisiana is sinking. The state’s coast has lost more than 1,800 square miles of land in the past century. Responding to this crisis, governor John Bel Edwards officially declared a state of emergency on April 19, 2017. Edwards hopes that this declaration will help expedite the process of federal permitting that has held up progress on a series of landscape restoration projects that are part of Louisiana’s $50 billion, 50-year Master Plan for the restoration of the coast. This plan seeks to rebuild the resiliency of Louisiana’s eroded coasts with new sediment, creating new levees to protect communities and wildlife sanctuaries, and constructing barrier islands to protect coastal communities from storm surges, among other exciting projects.

There’s reason to be hopeful. This Master Plan has already had a series of restoration success stories: A Long Distance Sediment Pipeline has transferred Mississippi River sediment to create and nourish approximately 542 acres of coastal marshland. Utilizing offshore sediment deposits, the Caminada Headland Beach and Dune Restoration project is rebuilding nearly 800 acres of sandy beach and dune landscape, including a wildlife refuge. And in coordination with local fisherman near the Calcasieu Ship Channel, Louisiana is installing earthen, rock, and sheet-pile structures along the channel to block saltwater intrusion into local waterways, thereby mitigating damage to fish and wildlife and reducing land loss by 21,000 acres. So where did this ambitious project come from?

Predicted land change over the next 50 years with no action. Coastal Protection and Restoration Authority of Louisiana. 2017.

In 2005,the Louisiana Legislature created the Coastal Protection and Restoration Authority (CPRA) to address coastal protection and restoration by generating a Coastal Master Plan. This plan is updated every five years, with the newest plan draft published earlier this year.

Over the past decade, Louisiana’s governorship has alternated between Democratic and Republican leadership. However, despite the National Review  and Louisiana Republicans’ well-documented history of opposing and blocking environmentalist legislation, the CPRA has lived on with widespread support from across the aisle. One cannot help but ask: How has this costly and ambitious environmental legislation received bipartisan support? Looking at the conceptual framework of the 2017 Master Plan, it becomes a little clearer how this radical restoration plan appeals across much of the political spectrum.

One cannot help but ask: How has this costly and ambitious environmental legislation received bipartisan support?

The Master Plan for the the restoration of Louisiana’s coastline is framed in terms of the economic cost of land loss. For instance, the plan cites a 2010 study that claims that the Mississippi River Delta provides at least $12 to $47 billion in benefits to people annually, as well as a 2015 study noting that land loss in Louisiana puts between $5.8 and $7.4 billion in annual output at risk. CPRA claims that the plan will save the state more than $150 billion over the next 50 years.

New Orleans residents are only too aware of the truth behind these numbers. In 2005, Hurricane Katrina destroyed or severely damaged 80 percent of the city’s housing stock, and reconstruction of housing and household items was estimated to cost between $27 and $35 billion. Land loss was partially to blame for this devastation. New Orleans’s natural defenses against storm surges—coastal marshes that absorb excess water—had been systematically destroyed by the development of the city, thereby increasing the devastating effects of Katrina.

Drawing heavily from the 2010 BP oil spill settlement, 2017 Master Plan’s budget is funded by the same agents who have caused extensive environmental degradation. Future restoration projects will be funded through taxes on motorized boats under the CWPPRA, revenue sharing from outer continental shelf gas and oil exploration, and taxes on oil and gas production on state lands. Throughout the Master Plan, actors are expected to pay for the environmental damage they cause.

Given that CPRA’s Master Plan satisfies left and right, simultaneously addresses environmental degradation and economic development, and is well-funded, one has to ask: What can one possibly oppose?

Land erosion has resulted in pipelines passing directly through marshlands and bayous. Loe.org, 2017.

On the one hand, the Louisiana State University Law Center has refuted many of the ecological claims made in the Master Plan. They argue that coastal restoration will not necessarily reduce storm surges and that land subsidence and sea-level rise may make many projects useless in the long run, making it a poor allocation of public funds. In addition to these material issues, the Law Center takes issue with the 2017 master plan’s newest focus: resiliency.

Fundamentally, resiliency is about how to maintain the functionality of any system (ecosystem, economy, community, weather system, etc.) in the face of external disturbances, natural or artificial. Recently, the concept of “resiliency” has emerged in discussions of environmentally-conscious urban planning as both a critique of and substitute for the idea of “sustainability” (although this understanding of “resiliency” has been disputed). In a 2012 New York Times Op-Ed, Andrew Zolli, author of Resilience: Why We Bounce Back, summarized the distinction, “resilience: how to help vulnerable people, organizations and systems persist, perhaps even thrive, amid unforeseeable disruptions. Where sustainability aims to put the world back into balance, resilience looks for ways to manage in an imbalanced world.”

CPRA’s work has reflected this paradigmatic shift. They define resiliency as “the ability to withstand naturally variable conditions and/or recover from disturbances.” While the title of the master plan communicates that CPRA is producing a comprehensive plan for a “Sustainable Coast,” they also recognize that a sustainable coast “is one characterized by consistent levels of productivity and resilience.” 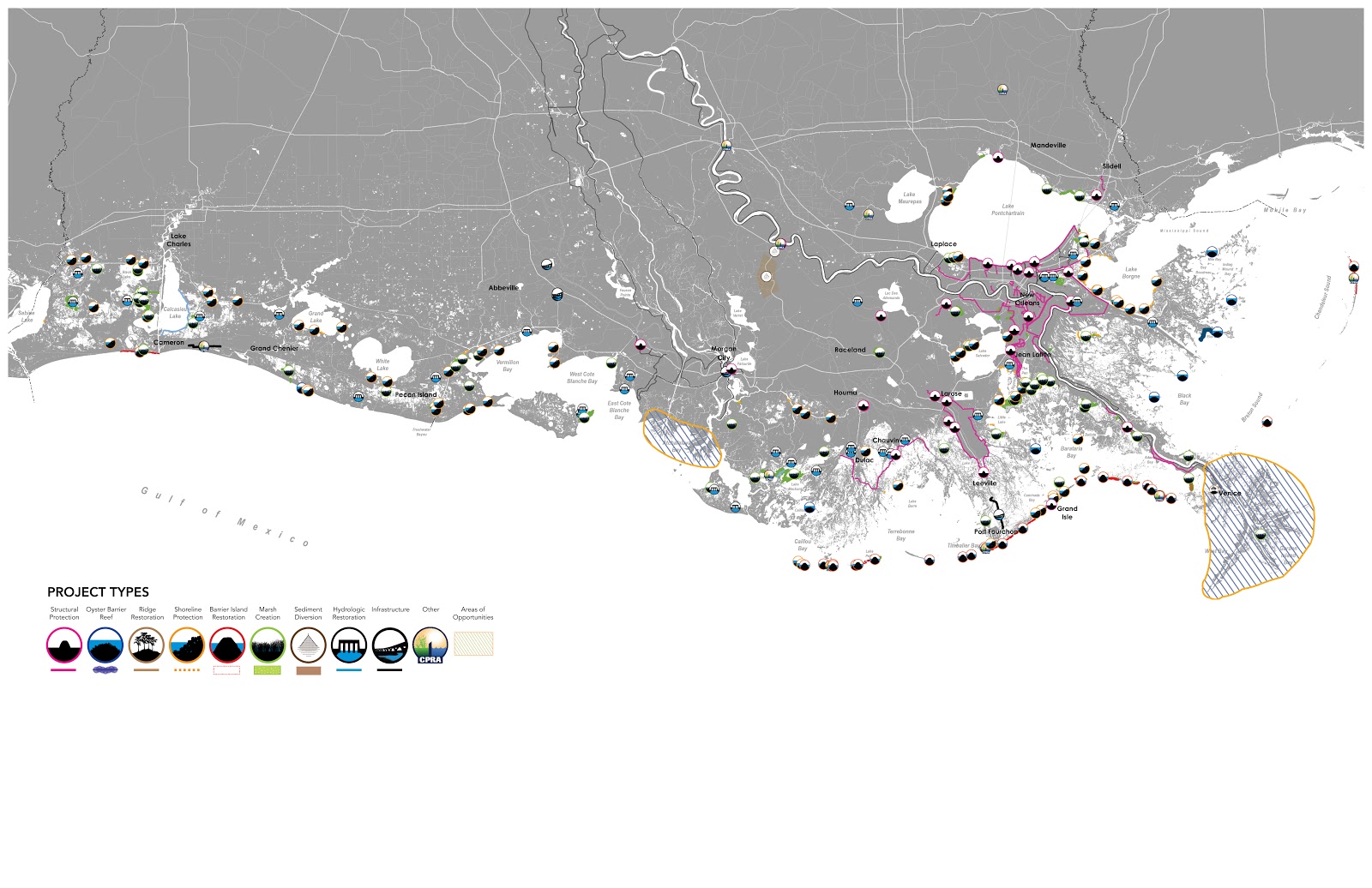 Resiliency in action: map of all CPRA restoration projects that are either completed or funded. Coastal Protection and Restoration Authority of Louisiana. 2017.

This shift towards resiliency is not merely idle language. The 2017 plan introduces a Flood Risk and Resilience Program, CPRA received a $92.6 million grant for resilience-building strategies in disaster-affected areas, and the City of New Orleans released one of the world’s first comprehensive strategies for building city resilience in August 2015. A compilation of resiliency successes and best practices in Louisiana have been organized in a website by the Louisiana Resiliency Assistance Program. For instance, recognizing that human-caused land subsidence creates potholes that require frequent and expensive repairs, New Orleans is creating “water boulevards” that slow and store rainwater, thereby reducing flooding and slowing subsidence. CPRA is re-conceptualizing its master plan in terms of resiliency.

Resiliency-based planning, however, has been opposed by grassroots organizations and activists. In 2015 in response to the City of New Orleans’s resilience strategy, posters started appearing throughout New Orleans quoting Tracie Washington of the Louisiana Justice Institute. “Stop calling me resilient,” the posters read, “Because every time you say, ‘Oh, they’re resilient,’ that means you can do something else to me. I am not resilient.” As Jackson makes clear, instead of simply addressing the cause of environmental degradation such as land loss, Louisiana has apparently accepted the inevitability of this degradation–and is learning how to cope.

Instead of simply addressing the cause of environmental degradation such as land loss, Louisiana has apparently accepted the inevitability of this degradation–and is learning how to cope.

As Maria Kaika, Professor of Human Geography at the University of Manchester, remarks, “if we took Tracie Washington’s objection seriously, we would stop focusing on how to make citizens more resilient ‘no matter what stresses they encounter,’ as this would only mean that they can take more suffering, deprivation or environmental degradation in the future. If we took this statement seriously, we would need to focus instead on identifying the actors and processes that produce the need to build resilience in the first place. And we would try to change these factors instead.”

The funding mechanisms for the Master Plan reflect a general attitude in which resilience is promoted over identifying and transforming the processes that necessitate resilience in the first place. Instead of mitigating activities that cause environmental degradation (OCS exploration, extensive fishing, and oil and gas production), Louisiana has simply forced the agents of these activities to pay for their cleanup. The master plan seems to communicate the following: if an industry causes environmental degradation, it can be resolved through monetary contributions. The question of mitigation is never addressed.

Furthermore, it is not clear whether the agents that are causing environmental degradation are paying enough. For instance, the 2012 master plan admits that oil and gas drilling were a key cause of losses of wetland and marsh areas, which added to the excess damage of Hurricane Katrina. This begs the question: For what portion of the $27 – $37 billion bill that followed should companies engaged in oil and gas drilling have been held responsible? Why is the money coming from these companies not equal to this portion? Under the rubric of resiliency, do oil and gas companies still reap the benefits of environmental exploitation even when they are forced to fund restoration projects?

It should also be recognized that the cost of environmental degradation includes more than the loss of money and “cultural heritage,” to quote the 2017 Master Plan. In the wake of Katrina, the destruction of New Orleans and the coast led to the evisceration of neighborhood networks—the group of family, friends, and associates to which people can turn for help—on which lower-income populations depended. As George Lipsitz noted after Katrina, “Displaced residents of the seventh, ninth, and 13th wards stand to lose much more from Hurricane Katrina than the owners of mansions, luxury apartments, office buildings, and hotels, because although they were resource poor, they were network rich.” The 2017 Master Plan fails to address that resiliency and restoration cannot replace the neighborhood networks destroyed by the initial wave of environmental destruction that are often essential for working-class communities.

Resiliency, then, is the attempt to square the circle of an impossible contradiction.

Resiliency, then, is the attempt to square the circle of an impossible contradiction: given the need to address the land loss crisis, the agents and processes of environmental destruction are identified and held accountable; however, the operations of these industries—excessive fishing, oil and gas exploitation, and wetland destruction due to urban expansion—are never called into question. Rather than challenging environmentally destructive practices and industrial operations, policymakers opt to prepare Louisiana residents for the inevitable, to make them resilient so that these industries “can do something else to them.”

So where do we go from here? Grassroots organizations throughout the world are proposing alternatives to the rhetoric of resilience which can inform our ideas of environmental restoration. In Scotland, Govan Together was a year-long program that sought to create a grassroots-based resilience, which they redefined as resourcefulness. And in New Orleans itself, grassroots efforts by the Louisiana Justice Institute under the leadership of Tracie Washington are demanding environmental justice for poor and black communities. Working towards an alternative to resiliency, Washington and the Louisiana Justice Institute pressure the state to insure that the coastal Louisiana environment is healthy enough for working-class and African-American families to make a good living and have access to high-quality education and affordable health care. Though resiliency may be proving to be a dead end, these organizations are forming novel, innovative visions in order to imagine a more equitable, environmentally-conscious earth.

Max Woods is a Ph.D. candidate in the Department of Comparative Literature and Folklore Studies at the University of Wisconsin–Madison. His work focuses on the overlap of urban design, environmental studies, and modernism and has previously appeared at Species and Class. Prior to coming to UW-Madison, Max co-founded Orchestrating Diversity, a high-level orchestral music program for underserved youth in the St. Louis area. Contact.

Edge Effects is a digital magazine about environmental issues produced by graduate students at the Center for Culture, History, and Environment (CHE), a research center within the Nelson Institute for Environmental Studies at the University of Wisconsin–Madison.